Why is Video Better for Verification than Voice?

Many of us have been using emailing, texting, instant messaging, video chats, and so on – they are the modern 21st century tools that have been around for a long time. Yet we are still stuck in the 20th century with many companies requiring us to make voice phone calls for verification.

For example, I experienced credit card fraud a month ago and was notified via email by the company forcing me to call them for verification after my credit card was blocked. As a deaf person, I cannot make phone calls and don’t like using third party relay calls – especially when it comes to security concerns. I’m often being told to ask someone to call on my behalf or to visit a branch in person. I should be able to communicate with people directly and not to rely on someone else to do it for me. Visiting a branch during limited hours is not only inconvenient, but also puts deaf customers at unfair disadvantage. Many companies often tell us to use TTY, the outdated technology that most of us no longer use.

Many companies that I communicate with when I have a question or a problem offer email and chat systems which is great. However, I get frustrated when it comes to verification. For example, my bank can communicate with me via secure email and chat, but a credit card company affiliated with the bank would not even use those systems, to say nothing about better ways of verifications than via voice calls only.

Deaf and hard of hearing people are not the only individuals who hate to be told to use phone calls. Many people with normal hearing – especially millennials – don’t like to use voice calls and prefer to use texts instead – for various reasons such as dealing with representatives who have heavy accents or being frustrated with robots who cannot understand their accents. Research shows that text messages are 5 times more frequent on mobile phones than voice calls. For these reasons, fewer people are likely to fill out online forms where they are forced to put in phone numbers.

Apple recently unveiled iPhone X that would allow you to unlock your phone using your face. It is a step ahead in terms of biometrics. Yet many companies still force us to verify using outdated voice-based technologies.

Many computers and mobile phones already have built-in webcams. They would be a perfect solution for security verifications. Having your company verify you via webcam is no different from verifying in person. Forcing to verify based on voice only is not user-friendly not just to those who are deaf, but also who cannot use speech or who have heavy accents that are hard to understand. Video technologies have been around for so long that it’s incredible that many organizations have not considered using such a simple solution for security verifications.

There are many video-based chat systems such as Skype or FaceTime or Google Hangout which also have an option for text or voice. Many companies can easily implement such systems for security verifications. They can build a database of accounts with photos that could match with faces of people to verify via webcam.

Let me show you an example of a simple solution for video verification the photo below. A company could develop an internal secure video chat system to allow people to use after logging in their online accounts in a website or a mobile app. It could include an option to use voice or to type or to interact via video.

If your organization is interested in implementing this new solution for video verification, let me know. I’m happy to work with you on improving usability and accessibility of your telecommunications systems. 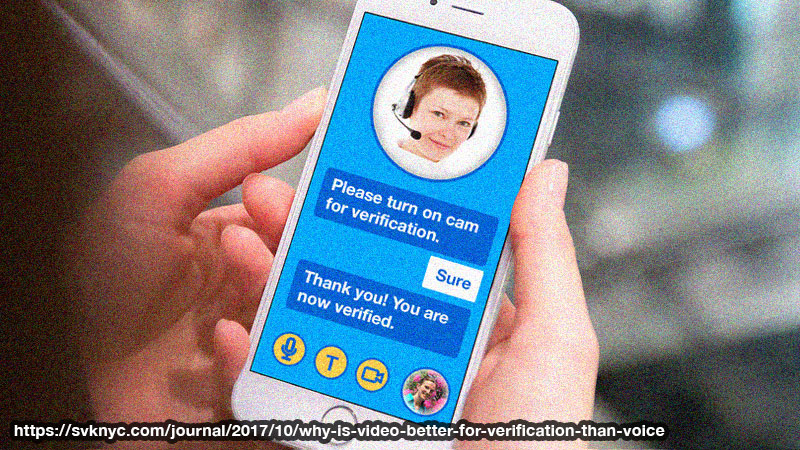