Why Self Publishing Is a Great Opportunity 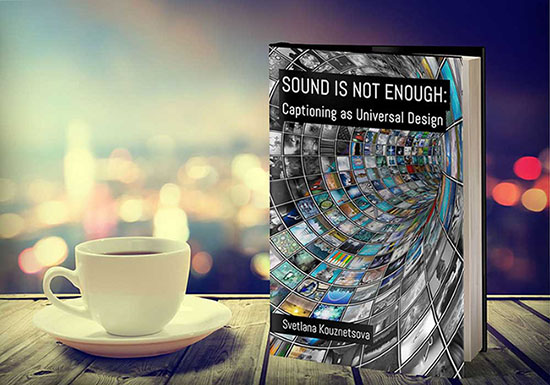 When younger, I was dreaming about writing and publishing a book at some point in my life. Being deaf and dealing with a lot of communication and information access limitations to aural Russian and English, I was not sure if it would be possible. Literature was the most difficult subject for me in school (due to the lack of communication access and ability to participate in class discussions) and I always dreaded book report assignments. In addition, traditional publishing would make it even more difficult. So I had such a great feeling of accomplishment when I published my book a year ago – first in digital version, then in paper version.

My book is titled Sound Is Not Enough: Captioning as Universal Design. Even with self publication, it was still not an easy task. It was a long road for me to be able to write a book in English – other language than my native Russian. That is not something I would have thought of when younger trying to become fluent in English. Then I needed to figure out what to write about. It was a natural progression after dealing with lack of communication access in many areas of my life and also giving presentations at events and conferences. Many of my fellow presenters published their books, and it made me wonder why not do that myself. Since many of my talks are about accessibility and a lot of people (both hearing and deaf) are not aware about captioning as universal access, I decided to write a book on that topic.

The next thing was to figure out how to publish a book. After attending book publishing events, reading articles, and participating in online forums and groups, I decided that self publishing would be the best route for me. Main reason was because I wanted full control of my publishing process. It was not easy. Since you have full control, you wear many hats – interviewing and hiring editors, cover designers, legal advisors, learning how to create electronic and paper books, figuring out a good title, researching printing vendors, figuring out marketing strategies and so on. It was a learning experience for me.

With background in design and coding, I had no problem leaning how to create an e-book and already know how to do inside page layouts. I hired a designer to do a cover (who did a great job) and I modified the cover a bit. His name is Nik from BookBeaver.

Hardest part was picking an editor. I had to do three rounds of interviews. The first round didn’t work out as I could not find editors that fit my schedule. After the second round I hired an editor who broke the agreement in the middle of the project, and I had to fire her. So I was nervous and frustrated when doing a third round of interview, but I was fortunate to find someone who was only a great editor, but also a professional business owner and clear communicator. To anyone looking for an editor, I recommend Keith Morrill, an owner of Little City Editing.

I used Blurb for a hard copy because they offer an easy to use feature to create and upload files. I worked in InDesign with a plugin from Blurb that would automatically upload my finalized PDF files to their database. After a few months of selling my hard copy via Blurb, I added Amazon to my list of distributors. For e-books, I use Draft2Digital to distribute them on several websites, including Nook and iBooks.

When I first got a hard copy of my own book, it was so hard for me to believe that it was something that I wrote! Having experience as a self publisher, I became more confident about being an author. While it is not an easy process, it’s not impossible to write and publish a book. To those who want to write one, go for it!