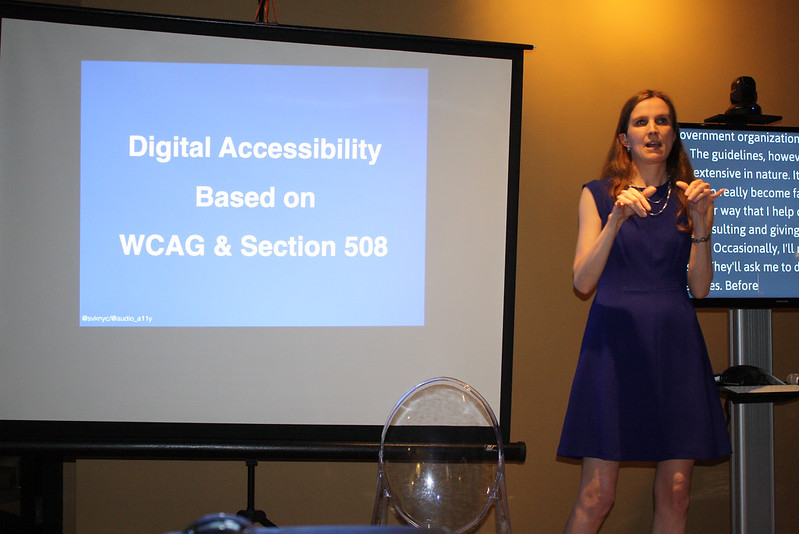 There is still a lack of awareness about accessibility – even in the UX field with an emphasis on users. When it comes to doing user research and interviews, usability testing, personas, user flows, people with disabilities are not included. It’s important to keep them in mind as they make up the largest minority in the world which is 1 billion of people (about the population size of China) with $4 trillion spending power.

Also, 70% of people with disabilities are unemployed or underemployed and many of those who are in work force often face discrimination or get frustrated with accessibility issues. Many events are also not accessible. As a deaf professional, I’m often frustrated when many organizers make excuses not to make their events accessible via good quality communication access services. It sadly also applies to many events related to UX and Product Management (another field I’m interested in).

NYC UXPA is one of few organizations making efforts to make their events accessible and also asking me for consulting and training on the best ways to improve accessibility.

The following are excerpts from my presentation:

#Diversity & #Inclusion does Not include people with disabilities @svknyc #accessibility pic.twitter.com/bKp0MEnOkB

In my presentation I discussed my consulting and training in disability awareness, digital accessibility, and media/event accessibility for deaf and hard of hearing, showed practical examples of why accessibility is universal design and how it benefits everyone and improves business bottom line, and shared my personal experience as a deaf professional.

Thanks to NYC UXPA for having me speak at their event, making it accessible for me as a presenter, and following my recommendations on good quality live captioner and sign language interpreters. I look forward to giving a few more presentations lined up later this year.

Do you want to learn more about accessibility and to have an experienced deaf professional give a workshop / training to your organization or speak at your event / conference? Contact me!